I'd heard rumors of this car several times but wasn't sure I'd believe them.

Here's the article from the L'anse paper: 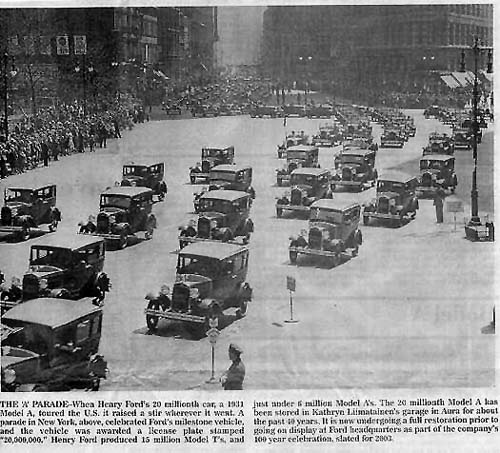 "The 'A' Parade--When Henry Ford/s 20 millionth car, a 1931 Model A, toured the U.S. it raised a stir wherever it went. A parade in New York, celebrated Ford's milestone vehicle, and the vehicle was awarded a license plate stamped "20,000,000." Henry Ford produced 15 million Model T's, and just under 6 million Model A's. 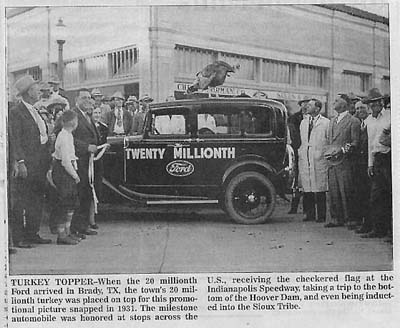 The 20 millionth Model A has been stored in Kathryn Liimatainens's garage in Aura for about the past 40 years. It is now undergoing a full restoration prior to going on display a Ford headquarters as part of the company's 100 year celebration, slated for 2003.---How did Henry Ford/s 20 millionth vehicle, a 1931 Model A, wind up in Kathryn Liimatainen's garage in Aura?--Liimatainen's son, rod, is the owner of the vehicle that recently re-embarked on its remarkable journey into history. With the help of news clips, photos, memories and a friend, Rod traced the Model A's path to his door, and beyond.--The story begins way back, on April 14, 1931 to be precise, when Henry Ford drove that same vehicle off the assembly line with his son, Edsel, in the passenger sear. Photos were snapped outside the Rouge plant for posterity, and then Colonel CD Hilton took the wheel to begin a grand tour of the US. (This guy is still alive) --The company's logo and "Twenty Millionth" were emblazoned in white paint on both the vehicle's sides and roof. The advertisement on top drew attention to Ford's growing interest in aviation--the company was also building its famour Ford Tri-Motor planes at the time--and stops were scheduled at Ford branches across the U.S.--The car's first stop was in New York, where it was received in grand style. It was greeted at the steps of the city hall by Mayor James Walker, followed by a parade up Broadway at noon. In the governor's absence his wife, Eleanor Roosevelt, took the car for a spin when it visited the governor's residence.--The car was also given a license plate bearing the number "20000000" the first of many it would receive from states across the U.S. After leaving New York, Hilton drove to the West Coast, then Southwest and South, and finally back to Dearborn.--The car was driven by a steady stream of dignitaries along the way, ranging from mayors to movie stars. Douglas Fairbanks took the wheel, as well as explorer Admiral Richard E Byrd, champion golfer Glenna Collett and Clarence D. Chamberlin, transatlantic flyer.--The car enjoyed other tributes as well. It received the checkered flag at the Indianapolis Speedway, was inducted into the Sioux tribe, became the frist privately-owned car to descend to the bottom of the Hoover Dam, and was branded and draped with snake skins in Texas. --So how did it come to rest in Liimatainen's garage?--Well, the tour wound up about September, and the vehicle was parked at the Ford Museum in Dearborn. It was there for nearly 10 years, and had just about worn out its welcome when Rod's dad, Carl Liimatainen of Aura, went to Detroit to buy a car for his father, Charles.--"Charles was a homesteader in Pelkie," said Rod. " My uncle knew about the car, and told my dad the Ford Museum was going to sell a brand new Model A."--Family legend has it that there was only so much room for displays at the museum, Rod said, so the 20 millionth went up for sale. His mom believes that Carl paid $550 for the automobile, comparable to new car prices of the day.--Carl took his sister, Helvi, with him to drive the Model A back home. Rod said his Aunt Helve had two 20-minute driving lessons before taking the wheel and steering toward home. Rod added that Helve (Liimatainen) Werthimer now resides on Ford road in Ford Village, a retirement community in Dearborn. --when the car was safely home, Carl turned the vehicle over to his father with the understanding he would some day get it back. Carl's father drove the car for about 16 years, and the car had 42,000 miles on it when it retired in the late-'50's."--"My dad knew it would be a valuable car," Rod said. "My grandfather drove it as a regular car from 1940-1956. when my dad died in 1958 for some reason he said I should get the car. It was titled to me when I was 18, and it's been in our family for 60 years."--The '20 millionth" lettering had been painted ovr before Rod got the car, but could still be distinguished. Like his father before him, he knew the car was something special, and stored it in his mother's garage from about 1960- until a short while ago.--The car came to light again in 2000, when Ford Historian Bob Kreipke was in Baraga County researching Ford activities for the company's upcoming 100th anniversary in 2003. Kreipke was a featured speaker at the American Legion in L'Anse when Kathryn's neighbor Jimmy Brown, met him and mentioned the vehicle. --Liimatainen said that Kreipke was understandably skeptical ("I doubt it" was the quote Liimatainen used) until he was introduced to Rod's brother Bob, who was also at the Legion that night. Kereipke followed up on the lead, and discovered a gem that the company has assumed was lost forever.--William Clay Ford II, chairman of the Board for Ford Motor Co., came to see the car in Aura and visited with Kathryn. She had cooked for Henry Ford at the Ford Bungalow in Pequaming, and a short while after William's visit, she received an autographed picture of him and herself in her home.--The car was hauled downstate soon after in a van the Ford uses for its clay model and prototype cars, Liimatainen said. Kreipke and Liimatainen's nephew, Mike Reuss of Chicago, were also on hand for the big move, and helped roll the vehicle out 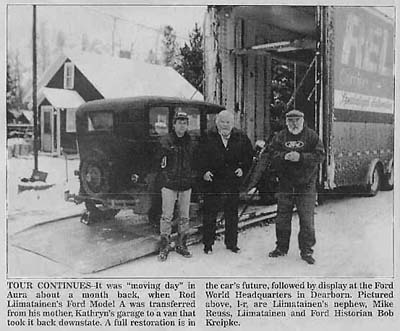 of the garage and into the van for its journey home. (so did Dave) --Liimatainen has leased the vehicle to Ford for a 10-year period. After a full restoration, the company will display the vehicle at Ford Headquarters in Dearborn. Liimatainen noted a spot has already been picked out for the vehicle that was once sold for lack of floor room.--"They're making a documentary about the car, and they started filming when they picked it up, about three or four weeks ago," Liimatainen said. "The car will also be part of their 100th anniversary commemorations, in 2003."--The process of bringing the 20 millionth Ford back to light has unearthed another gem for Ford : a collection of photos tracking its tour across the U.S. The source of those pictures is as amazing as the rest of the story, because they came from Leigh Austin, a Nisula man whos father was a cousin to Colonel Hilton.-- Austin and Liimatainen have a common friend, Larry Heikkinen, who had heard both men talk about their connection to the 20 millionth Ford. Heikkinen finally brought the two together, and their pieces of the puzzle snap together to help flesh out the famous car's past.--"I got the photos from another cousin," Sustin said. "Thery're old, and didn't mean nothin' to him. 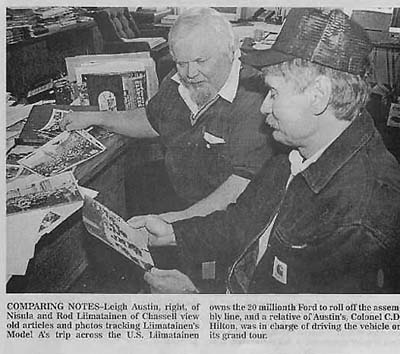 He probably would have thrown them out."--Austin has also done some reseach on the subject, and added another note of interest to the story. In 1931 he said, 27 million vehicle were registered in the U.S. Twenty million of those were Fords.--A restorer has just been approved for the vehicle, Liimatainen said, on who was suggested to him by Dave and Marcy Cella of Skanee. The couple are big fans of Model A's and their recommendation rang true with the company as well, which will invest over $100,000 in the restoration by the time work is completed. --When his car comes back in 10 years, Liimatained said, he won't go behind the wheel. The insurance alone would cost too much, and he knows the 20 millionth's value far exceeds whatever its price tag might say.--"It's likely to go in a museusm someplace," Liimatainen said. "It's not something you want to risk driving!"